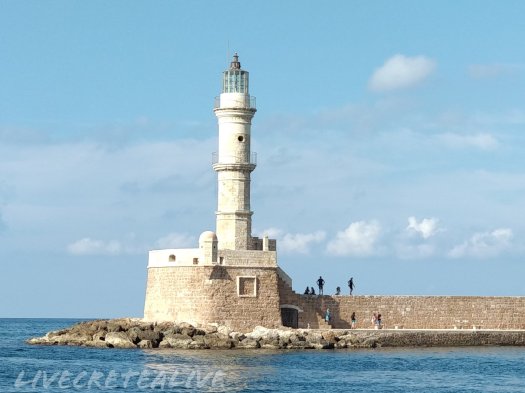 Although the lighthouse was built during the Venetian occupation we call it an Egyptian lighthouse because it was restored by the Egyptians during their rule on Crete from 1830 until 1840, that’s right, during the Ottoman occupation.  It was the Protocol of England that granted Crete to Mehmet Ali who was Regent of Egypt at that time.

As you can see on the picture the base of the lighthouse has 8 angles, the part above the base has 16 angles and the highest part has a round shape.  During days of threat the entrance of the port was closed by tying a chain from the lighthouse to the Venetian fortress Firka that is situated opposit of it.

The Egyptian administration made big efforts to have equality on the island for both the Christians (Cretans) and the Moslims (Ottomans). They also achieved to have a time of peace on the island.  Because of these changes, many Moslims left Crete and went to Asia Minor and many Christians left to go live in Greece.

Besides a time of peace, this was also a period of the reconstruction of roads, aquaducts, bridges and harbours that had been destroyed during the many revolutions of the Cretans against the Ottomans.  Also education was organized again for both the Cretans and Moslims, even a newspaper was published (1931) in the 2 spoken languages of the island.